Getting to Yes: iOS 14.5 Opt-In Suggestions 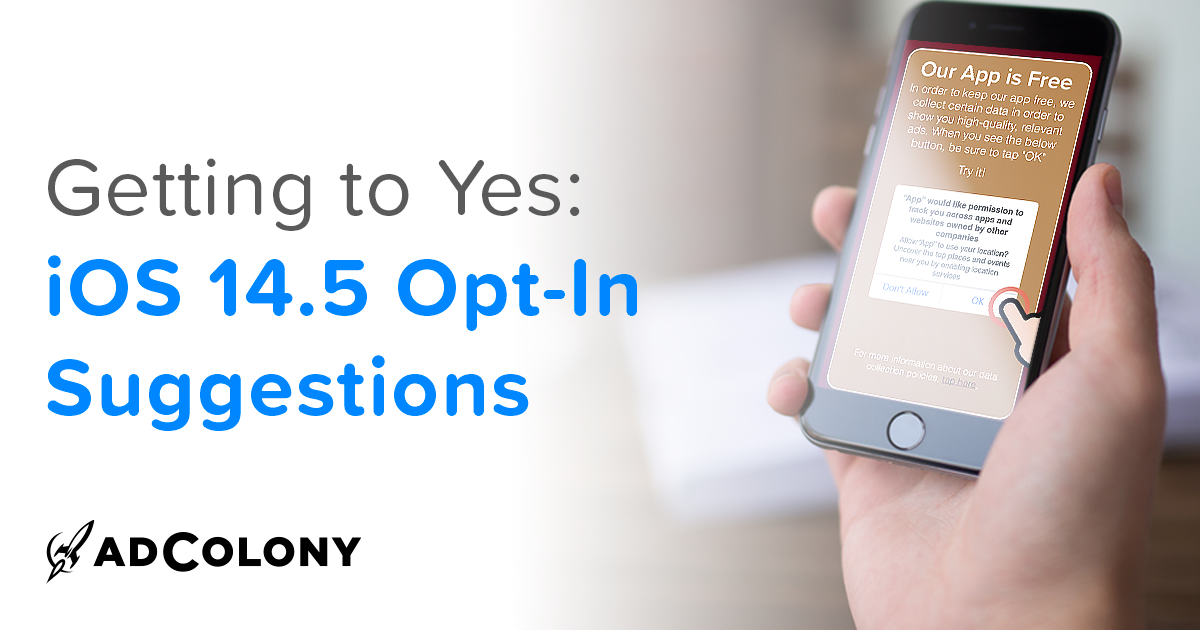 It’s March 2021, which means the release of iOS 14.5 is just around the corner, bringing with it Apple’s required privacy framework, AppTrackingTransparency (ATT). As you probably already know, the framework will prompt users to opt-in to allow app tracking. For developers (and therefore advertisers), getting users to opt-in will be a challenging yet imperative task. But how exactly do you secure opt-ins from users? We’ve compiled some best practices along with suggestions to consider when ATT launches later this month.

In case you missed it, we published a preliminary guide to asking for permission last year. Since then, Apple clarified some points, and best practices have begun to emerge from conversations with our publishing partners. Below are some practical suggestions to set you up for the best chance of success.

Be specific and clear in your messaging
Apple allows you to present a short message explaining why your app is requesting permission by using the purpose string (sometimes called a usage description string) in your app’s info.plist file. Here are some good examples that should comply with Apple’s guidance:

Obviously you can customize these to make them your own. It’s your app and you know your audience best so adapt, test and iterate.

Facebook has already rolled out their prompt to convince users to Allow Ad Tracking. The new messaging is being shown to more and more users by the day in an effort to provide Facebook with data on how Apple’s privacy change might affect their business. The social network has been very vocal about their criticism of the new policies and said publicly that they will use their prompt to educate consumers and “help people make a more informed decision.”

You can only ask the user once to opt-in. Make it count!
An app only has one chance to ask users to opt-in using this framework. If a user taps “Don’t Allow” on the modal, the request will always return zeroes for the IDFA, and that app is prevented from tracking the user through any other means as well (not sharing the IDFA is Apple’s OS complying with its own privacy requirements). There’s no way presently to resurface the modal like there is for App Store reviews. They can only allow tracking by uninstalling and reinstalling the app or through settings.

Place opt-in message where users are most likely to give consent.
If you’re using SKAdNetwork for user acquisition (and for your iOS campaigns, you should be), there’s no need to present the ATT on the first launch. There are a couple of ways developers can provide more context before the user is prompted to allow app tracking. It’s important to remember that the ATT prompt needs to be presented before the app initializes any SDK that requests the IDFA, which will immediately look for the IDFA. They won’t find it at that point.

The Control
Using Apple’s opt-in, we recommend trying two timings on AppTrackingTransparency. The first scenario would show Apple’s modal at the launch of the app. This would provide no prompt or context. The only customization needed would be the small paragraph from the .plist title. The second scenario would be similar in that it would need customization from the .plist file only. The difference would be that it would be activated and called when an ad request is made. Keep in mind that there may be a delay before the user actually sees an ad. We recommend testing both of these methods as early as possible as an A/B test, and recording opt-in rates for both to see which yields the best results.

On Launch
This opt-in type is all about transparency. Branded, soft opt-ins (publisher created pop-ups that explain why users should opt-in) will be used for this flow. At the launch of the app, the user is given an explanation and shown an example of the prompt. The messaging can explain that data will be collected to serve high-quality and relevant ads. Users will then be prompted to tap “Ok” on the example prompt. It’s important to remember that a user cannot be prevented from interacting with the app because it would be against Apple’s TOS, so we recommend surfacing a close button to allow the user to exit.

With Rewarded Video
Offering a rewarded video allows for additional context and a taste of rewards for the user. At first, users do not see any context and AppTrackingTransparency is not called prior to engaging with a rewarded video ad prompt. After the user chooses to proceed with the reward, they are given an explanation, example prompt and encouragement using the soft choice modal. Users who tap “OK” see an ad with no IDFA shared that has been pre-filled as if the user were already opted-out for maximum user experience and the reward is given.

We recommend showing the ad at first since it can be cached as an IDFA-less ad instead of making the bid request after consent and delaying the ad. Users that tap “Don’t Allow” are given reinforcement (tap animation, wiggles, etc.), but a clear and obvious close button is always present.

Once a user gives consent, AppTrackingTransparency is called for real. Just a reminder that it should always be up to developers when to call ATT, not the monetization partner.

Remember: It’s against Apple’s TOS to incentivize or manipulate the user to opt-in. If a user chooses to opt out, they should still be shown a rewarded video ad. In this example, the video is shown regardless of opt-in status. You will want to make sure the reward is visibly and obviously granted before the real ATT modal is shown.

Settings Explanation
This option is available to get users who opted-out to opt-in to sharing their IDFA. If the user allows apps to request to tracking but has turned tracking off for your app, Apple allows you to provide a shortcut to Settings. This gives them a convenient pathway to change their tracking preferences.

Using a video or gif, you can show an example of how to turn on tracking and IDFA sharing via settings. Because you only have one shot to ask users to opt-in using the ATT framework, this will need to be done using a branded, soft choice modal.

Experiment, Experiment, Experiment
Regardless of how you approach the gathering of consent, approach it by complying with both the letter and spirit of Apple’s guidance. Try things. Change it up. Experiment with user cohorts and language settings.Track performance of both opt-in and opt-out users on engagement, LTV, and other important metrics that you care about.

Apple may not crack down on rule-breaking immediately, and they may (read: will) even offer more guidance and policy changes. If you maintain a privacy-centric mindset as you test and optimize for opt-ins, you will safeguard yourself from future changes coming out of  Cupertino.